Second half turnaround by the home side shatters Sydney’s defensive record in 2013.

The Canberra Raiders produced a Jekyll and Hyde performance to surge to a 24-22 victory against a shell shocked Sydney Roosters outfit.

After bumbling their way through the first 40 minutes, where the Raiders’ completion rate was below an abysmal 50 per cent, they produced the perfect half of football to storm to their sixth straight win at Canberra Stadium.

After keeping the Broncos and Parramatta scoreless through 160 minutes of football, the notion the Roosters’ defence was impregnable was shattered as the Raiders outscored their opponents 24-6 in the second half.

Raiders centre Jarrod Croker, who celebrated his 100th game for the club, said the side will take plenty of positives out of the game despite their poor start.

“I think confidence is a big thing and we will get from that because they are a quality side but I can’t thank the crowd here enough,” Croker said

“There were only about 11,000 of them but the noise they made in the second half got us home.”

When asked about the possible return of representative star Terry Campese from injury next week, Croker said it was too early to tell if he will run out against the Warriors.

“We’ll talk next week it still could be three weeks, but we cant rely on him because he hasn’t played in much in two years,” Croker said,

“But we were confident of getting the job done today with the guys we had.” 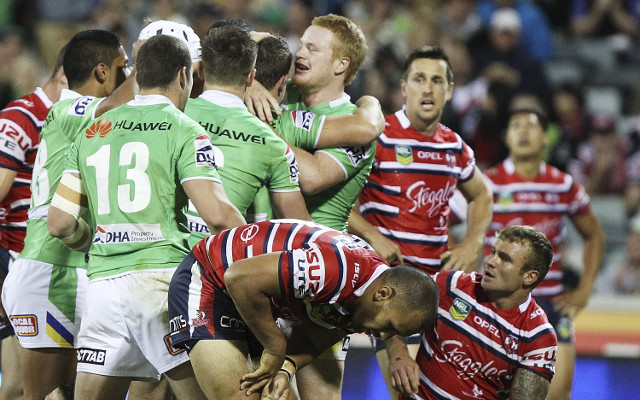 Roosters’ fullback Anthony Minichiello said the side cannot expect to win any games when they turnover as much ball as they did.

“We were in a good position at half time to go on and win it, they came back,” Minichiello said

“Our completion rate was terrible in the second half, so we need to hold the ball and we need to stop conceded a try and then another one soon after it.”

Croker made an inauspicious start to the game when he was ruled to have knock-on with James Maloney scoring after showing tremendous strength to get the ball down despite three Raiders players.

The home side racked up 18 tackles inside the Roosters danger-zone but they were unable to cross in the first 20 minutes.

A repeat set for the Roosters after another mistake by the Raiders and Michael Oldfield scored in the corner on his debut after joining the club from Manly.

Roosters’ backrower Boyd Cordner got his head in a terrible position and caught it on the point of Dane Tilse’ pelvis, resulting in a nasty head gash and a concussion which saw him not return to the field.

Mitchell Pearce pulled off a skillful grubber through the Raiders’ line allowing utility Mitch Aubusson to touch down to make it a third try for the away side for the half, as the Roosters skipped out to a 16-0 lead. 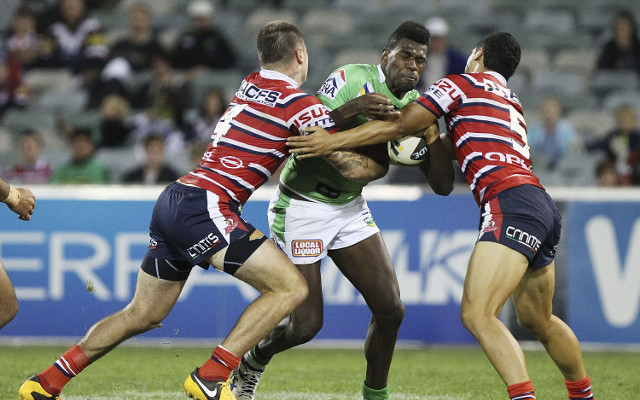 Canberra looked like a different side after the break, and after back-to-back sets, they scored through Edrick Lee with classy lead up work from Croker.

Sam Williams then scored off the back of perfect completion rate to date in the second half as the Raiders clawed their way back into the game at 16-12.

The Roosters landed a counter-punch when fullback Minichiello picked a Sonny-Bill Williams off-load off his boot laces to dive over to take his side’s lead back out to 10.

However, the Raiders showed there were not going away with Sandor Ear showing leaping ability more commonly seen in the AFL, to rise above the pack to score from a bomb.

Croker slotted the conversion to make the deficit just four with 13 minutes remaining.

The home side’s momentum became a tidal wave when Lee set up Croker with a sublime pass to the outside, with the Raiders centre slotting the conversion to give his side the lead with just two minutes remaining.

Sydney went for the short kick off but knocked it on sealing their fate and a remarkable comeback win by the Raiders.