The Brisbane Broncos have kept their foot jammed in the NRL finals door for now after earning a vital 26-24 win against the St George Illawarra Dragons at Suncorp Stadium.

With the weeks counting down before the post-season, the Broncos walk a tightrope to make an appearance in September.

However, the journey will become more difficult after the season-ending injury to star centre Justin Hodges, who ruptured his Achilles tendon in the first half.

The Dragons began well but a mistake from fullback Josh Dugan off a bomb gave the home side an ideal chance for them to score the first points.

However, a short-side move involving Hodges did not pat out and the Dragons earned the ball back on the first tackle.

The Broncos suffered a massive blow when Hodges went to step and only managed to crumbled to the ground without being hit by a player. 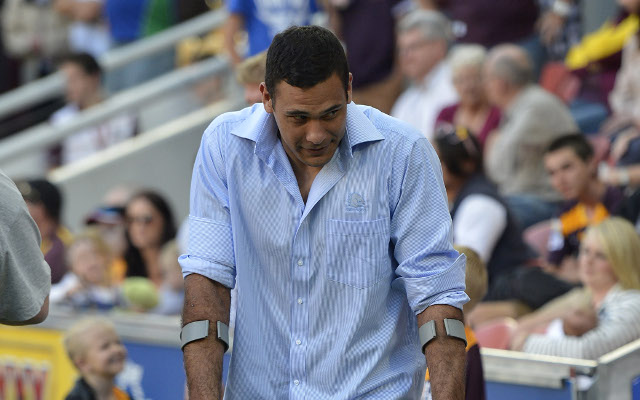 He was helped from the ground with a ruptured left Achilles tendon, in what is a blow for a player with a long history with leg injury.

The home side turned around the shock of loss of losing Hodges, when Jordan Drew, who became the 200th player for the Broncos in the NRL, capped his first game in the top grade with a try in the corner.

Brisbane then landed the conversion from the sideline to take an important 6-0 lead after half an hour had passed.

St George earned three sets on the Brisbane line, however, the home side were equal to the task as they defended their danger zone well.

In the shadows of half-time, Adam Quinlan captalised on the glut of possession the Dragons enjoyed in the attacking 20 metre zone, as he scurried across the line.

Dugan nailed the conversion as the scores became level, however, the hero became the villain soon after when the Dragons fullback knocked the ball on off the kick off. 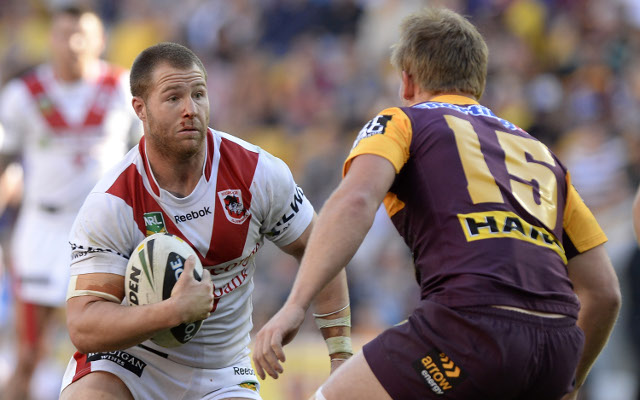 The half ended when players from both sides came together in a scuffle after Corey Parker reacted to some niggling tactics in tackle in what was a spiteful way for the first 40 minutes to finish.

As a result the Broncos earned a penalty from right in front, allowing Scott Prince to slot the shot on goal to take a 8-6 lead into half-time.

Brisbane got the perfect start to the second half when Jack Reed created half a break, before finding Matt Gillette on the inside to see him crash over to make it 14-6.

Quinlan made it a double for the afternoon as he captalised on the speed of Josh Morris on the Dragon’s left edge, as the visiting team stayed in touch are 14-12.

The Dragons saw Daniel Vidot crash over as the snatched a four-point lead, before the see-sawing nature of the game continued, as Sam Thaiday dived over alongside the posts to see the home side take the lead again. 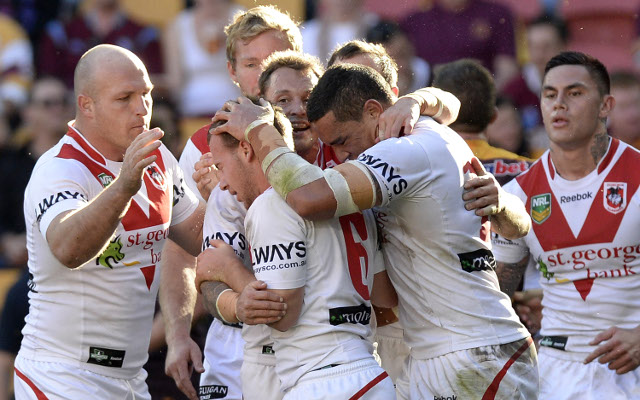 Brisbane bagged a try to give them a handy 26-18 lead before Vidot notched his second for the afternoon to set up a grandstand finish, with the margin just two points with a minute left.

St George had just enough time to put together one set of six, but a last-gasp chip kick was regathered by the home side, sealing an important victory.

The Dragons defeat was further soured by the loss of Trent Merrin in the dying seconds, as he limped off the field with an undiagnosed lower leg complaint.

Brisbane currently sit in 12th place, and can just scrape into the top eight if they win all of their remaining four games, with their next target being the struggling Parramatta Eels at Suncorp Stadium on August 16.

The Dragons will continue to build for 2014 as they take on close rivals the Cronulla Sharks at WIN Stadium, in what should be one of the toughest games of the round.