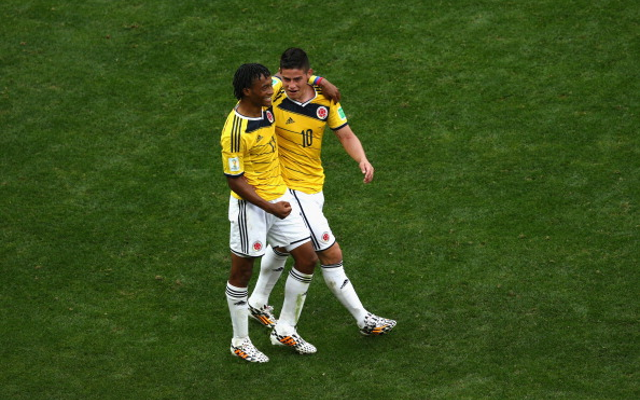 7 – Had no chance with either of the Brazilian goals and was largely commanding once again, making one absolutely outstanding save from Hulk in the first half.

6 – Dealt relatively well with Neymar, but was wasteful in attack, particularly as the game got into the latter stages and Colombia really needed to start delivering quality into the box.

7 – Has had a fine World Cup for a man of his age, once again not looking out of place. Unfortunate to see a potential equaliser narrowly ruled out for offside, would’ve been a fine way to cap his bow on the global stage.

6 – Impressively athletic, but both his reading of the game and distribution from the back seemed to be at question at times this evening.

7 – As with Zuniga on the opposite flank, dealt well with Brazil in a defensive capacity, but struggled to provide the threat from out wide that was needed when Jose Pekerman pushed him on in the second half.

7) – Snapped at the heels of Neymar throughout the match, contributing to the Brazilian talisman’s underwhelming display. Struggled to make an impact when in possession, however.

5) – Perhaps a surprise inclusion by Pekerman at the expense of Aguilar, Inter Milan star Guarin didn’t do much to justify his inclusion, looking particularly wasteful in possession.

6) – Huffed and puffed, but struggled to make the same impact on the ball that he did earlier on in the tournament, losing it trying to run past people on too many occasions.

8) – Another classy performance from James, who has emerged as one of the true stars of the tournament. Closed his goalscoring account on six after coolly dispatching a late penalty that gave his nation a chance.

4) – Thrown back into the team to cause problems for Maicon down Brazil’s right, but barely touched the ball in the first half – it was no surprise when Pekerman hauled him off at the break.

6) – Worked hard but didn’t really get the run of the ball and twice overhit passes that could’ve played his teammates in on goal. A frustrating evening for the River Plate man.