After failing in the last US presidential election, Mitt Romney is trading politics for the boxing ring as he is set to face Evander Holyfield for charity.

The 68-year-old former governor will feature in the event that is sponsored by Charity Vision, which aims to provide state-of-the-art medical equipment to poor areas of the world.

Romney insisted that he wanted to add more entertainment to the night, with the card also featuring bouts between professional prize fighters as well as his own foray into the ring.

Meanwhile, it is understood that Holyfield agreed to participate given the good cause it will benefit, but it is more than likely that the former heavyweight champion will take it easy on his opponent rather than get into a serious slug-fest.

“It will either be a very short fight, or I will be knocked unconscious,” Romney told the Salt Lake Tribune.

“It won’t be much of a fight. We’ll both suit up and get in the ring and spar around a little bit.”

The event will take place in Salt Lake City on May 15, although all parties concerned are probably not expecting viewing figures to match another bout that will take place earlier in the month.

According to medical records released during Romney’s 2012 presidential bid, he measured in at 6-foot and a half inches, and weighed in at 184 pounds.

Holyfield is 16 years younger than him, is two inches taller and weighed in between 205-225 pounds during the peak years of his career.

While the two men are likely to engage in more of a sparring session as opposed to an actual bout, it is certainly all for a good cause and there will undoubtedly be a few people around the USA delighted to see Romney receive a few digs from Holyfield. 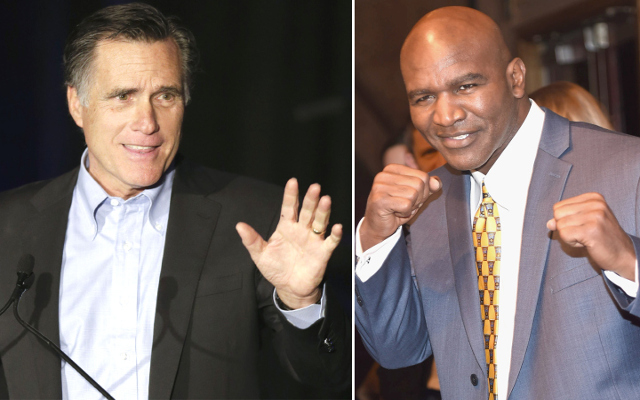