Rabbitohs halfback Adam Reynolds stars as Bunnies remain undefeated.South Sydney shrugged off the hype surrounding the return of Canterbury Bulldogs fullback Ben Barba to record a 17-12 win in front of a massive crowd at ANZ Stadium.

While much of the talk before the game surrounded Barb’a return to the number one jersey, it was Rabbitohs playmaker Adam Reynolds who took centre stage, with the halfback pushing his claims for a New South Wales State of Origin jersey further. 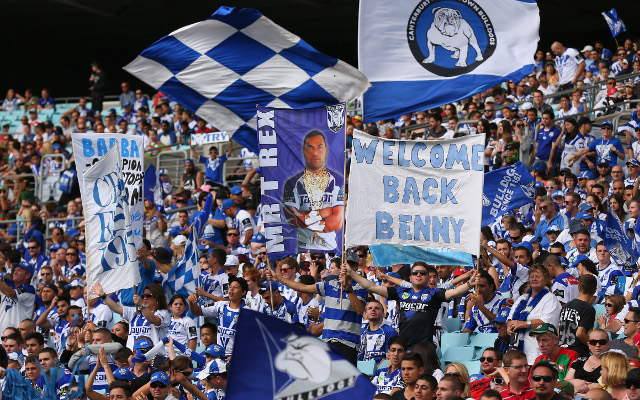 However, Reynolds will have to continue to perform at a high level with NSW coach Laurie Daley publicly declaring his preferred halfback is Roosters’ star Mitchell Pearce.

It was a disappointing return to the field for Ben Barba, but he did give a glimpse of what could be in store in coming weeks when he touched down with 10 seconds remaining off a Josh Reynolds kick.

The Bulldogs, who lost captain Michael Ennis to concussion late in the first half, opened the scoring via Mitch Brown, but George Burgess steamrolled over four defenders to lock it up at 6-all at the break.

Reynolds set up Merritt after a clever change in direction from Greg Inglis, before Krisnan Inu was lucky to stay on the paddock after an ugly spear tackle on the Souths fullback, commentator Greg Alexander saying, “it’s one of the worst I’ve seen for some time.”
The win for the Rabbitohs sees them remain undefeated after a month of the new season, with Melbourne the only other team to share that honour.