Kangaroos flex their might to dispatch of plucky Kiwis.

A stunning second half scoring spree by the Australian Kangaroos has sealed a comfortable 31-12 ANZAC Test match win against New Zealand at Canberra Stadium.

After a tight first half that saw the teams enter half-time locked at six-all, the world-class Australian side clicked into gear, running in five second half tries.

New Zealand suffered a blow before kick-off with captain Simon Mannering ruled out with a calf tear,  forcing 22-year-old Kieran Foran to take the reigns of his country.

Having, only lost six of their last 44 Test matches the home side went in as red-hot favourites but the understrength New Zealand side gave a good account of itself in a physical opening to the game. 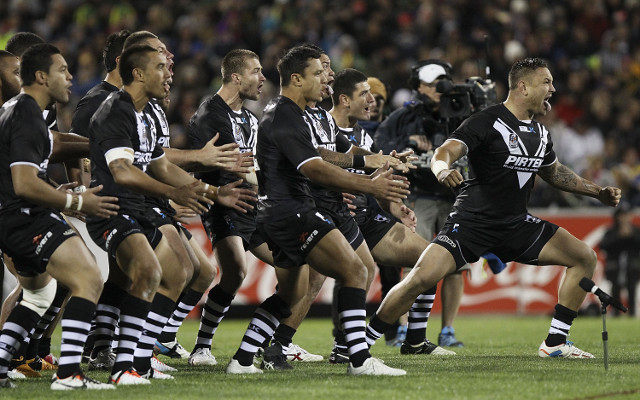 Australia got a good roll on through their ruck which saw Cooper Cronk open the scoring for his side after getting a handy off-load from prop Matt Scott.

New Zealand’s defence close to the ruck was showing early on it was not as strong as it needed to be against the high-octane Kangaroos.

But the visitors started to get some purchase with their use of second-phase play to try and break up the defensive line.

North Queensland’s Scott came off after just 14 minutes and went up the race into the change-rooms with an upset stomach, but he did return.

Sam Thaiday looked to have crossed after Jason Nightingale spilt a bomb backwards, to see the Broncos captain ground the ball.

However, a slight knock-on by winger Brett Morris in the air saw the try overruled by the video referee. 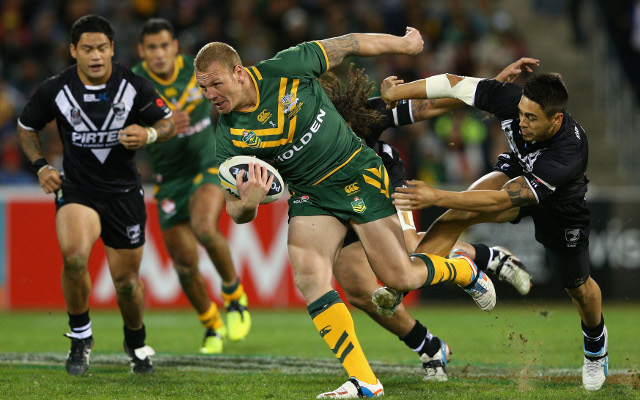 Australia started to become undisciplined and New Zealand looked to have capitalised in the lapse with Dean Whare crossing only for the try to be overruled after Hodges was taken out of the play.

New Zealand had three try-scoring chances correctly denied in the first 40 minutes, in what was little consolation for their solid play despite missing the likes of Benji Marshall and Sonny Bill Williams due to injury.

However, the Kiwis scored on the siren for half-time when Frank Pritchard grubbered through to see Josh Hoffman get to the ball first.

“Disappointing to give up points in the last couple of minutes from the first half,” Australian hooker Cameron Smith said at half-time.

“We were happy with our defence in that half, they only time they looked like scoring was from a kick, but our discipline could have been better.”

Jonathan Thurston was noticeably quiet through the first hour of the game, however, Australia have not had a lot of possession in a dangerous area of the field for him to work in.

After the resumption, a penalty on the last tackle for Australia led to some lazy defence by New Zealand on their own line, with Greg Inglis swooping on a loose ball underneath Hoffman’s nose.

Eventually the green light was given to Inglis’ 20th international try in what was a crucial
play to make the score 12-6.

A Luke Lewis line-break led to Brett Morris crashing over in the corner as the Kangroos scored
back-to-back to make it 16-6. 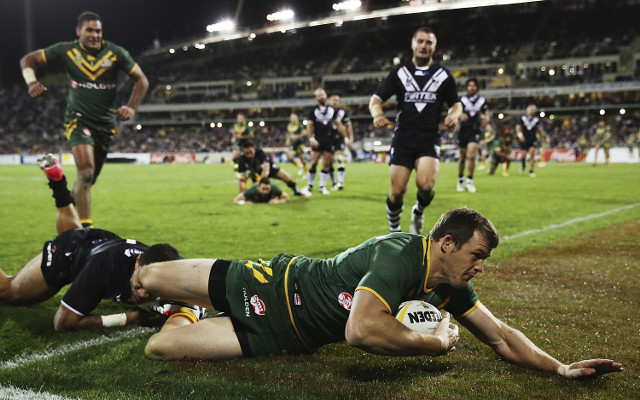 The two tries gave the Australians an extra spark with the ball in hand with the errors also started to hurt New Zealand.

Lewis put an exclamation point on an stint off the bench, by running an impressive line off his clubmate Paul Gallen to score under the posts to stretch the lead to 16.

The Kangaroos then exploded into action when Billy Slater burst up the middle from the restart,
leading to Thurston putting a grubber through to Darius Boyd as the Kiwi defensive line was all at sea.

Thanks to 82 per cent possession and five line-breaks in the game, the Australians ran rampant.

South Sydney fans held their breath when Inglis hobbled off with a possible knee injury with more news expected in the next couple of days.

But Hodges put the full stop at the end of the home side’s performance as they score off the back of another New Zealand mistake to make it 32-6 before Pritchard scored a consolation try for the visitors.