The home side fights back to claim overall honours on day two.

Australia has tightened its grip on the third Test of the current Ashes series after a disciplined bowling effort and key wickets saw England finish at 180-4 at the end of day two at the WACA in Perth, trailing by 205.

The touring side started well with Alastair Cook and Michael Carberry giving the side easily their best opening partnership of the series.

However, the wheels began to fell off before tea with the controversial wicket of Joe Root starting a period where the run-rate shrank from more than four to just over 2.5 in what was a lost chance for the Three Lions to show they want to not just win the Test, but retain the Ashes.

Earlier in the evening session, Kevin Pietersen and Mitchell Johnson resumed their battle this summer in what was a vital session for England and their hopes of retaining the Urn.

Peter Siddle joined in from the other end, as the Aussies found a probing line and length with the odd short ball to keep the Englishmen honest.

Both Pietersen and Cook were made to play and miss several times after tea as both batsman giving the Australia reason to hope another wicket would be around the corner.

The England skipper raised his bat for his 50, his 34th in his 100 Test matches, as he continued to struggle for fluidity at the crease. 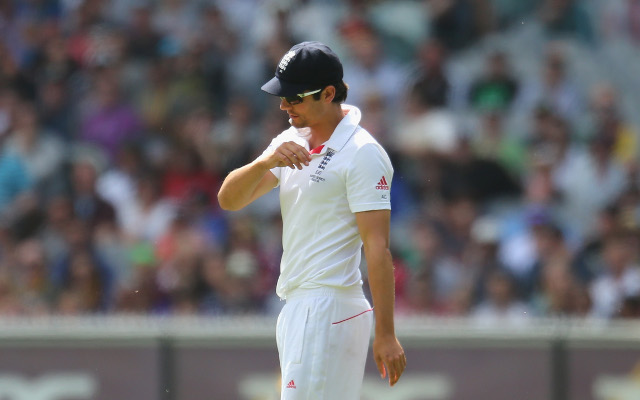 Pietersen’s strike rate continued to dwindle as the Australian bowlers were happy to tie him
up just outside off.

Pressure continued to build on Pietersen as the Australian bowlers gave him no width or length balls
to release the pressure.

However, despite the best efforts of the big crowd to push Johnson towards a vital wicket, the England pair remained stoic.

Nathan Lyon was brought into the attack in the hope of introducing a different pace of attack.

And the change worked as Cook played an uppish cut shot and it found David Warner in the gully and the England captain was gone for 72.

After battling for so long, one momentary lapse in concentration saw Cook dismissed for a gritty half-century, with his wicket  a massive one for Australia and just reward for excellent bowling either side of the tea break. 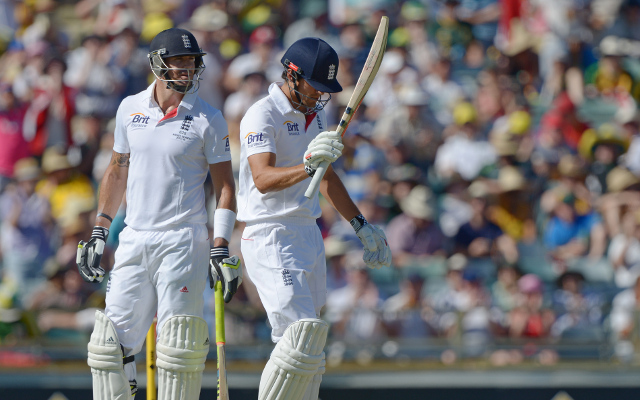 Pietersen then edged one through the slips, and the resulting four saw him score more than 8000 career Test runs, just the fifth Englishman to do so.

Finally the shackles were broken for Pietersen and in the favour of the home side as Siddle gets Pietersen for the 10th time.

The Englishman look to pull a ball over mid-on and only resulted spooning it to Mitchell Johnson who was forced to make a high leap to cling onto the ball in what was a massive wicket. 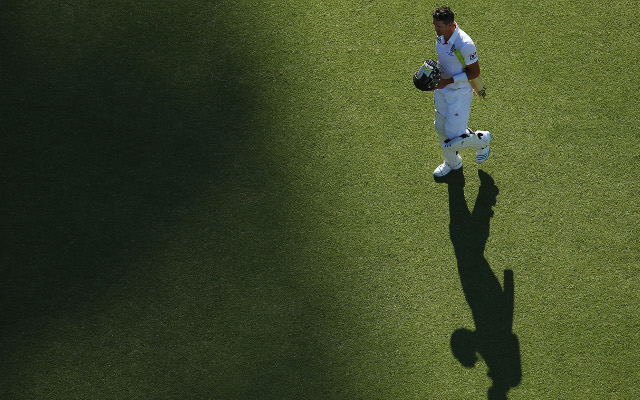 Australian captain Michael Clarke was arguably the key man for the Australians all day, with his bowling rotations and choosing the right time to implement them was combined with the conditions, the form of the English players and even the energy from the WACA crowd.

In what was the best possible outcome for Australia the two established batsmen, who never looked comfortable, were dismissed as Ben Stoakes and Ian Bell struggled to get the ball off the square.

Ian Bell (14 not out) and Ben Stokes (9 not out) did well to stop further wickets from falling before the end of the day, but overall, it was Australia’s day ad they continued to strangle England out of the series.