Football fans watch the Beautiful Game very differently to how they used to. Twitter is largely to blame for this.

Many fans tweet during games these days, while many players even trend on Twitter when there are no matches going on.

But which players get tweeted about the most? Well, Twitter have answered that question by creating an XI of the most mentioned Premier League players this season.

Arsenal playmaker Mesut Ozil and Chelsea assist-machine Cesc Fabregas line-up in midfield, alongside QPR’s Joey Barton, who was mentioned more than most for non-footballing reasons.

Another star frequently mentioned for his off-the-field exploits is Liverpool striker Mario Balotelli.

Balotelli is up front with Manchester United loan flop Radamel Falcao, who frequently trended for all the wrong reasons.

David de Gea is the most tweeted about goalkeeper – presumably a combination of people talking about his brilliant performance and his potential transfer to Real Madrid.

The defence is made up of Manchester City pair Vincent Kompany and Pablo Zabaleta, as well as United’s Luke Shaw and QPR’s Rio Ferdinand.

Arsenal’s Alexis Sanchez also gets in. 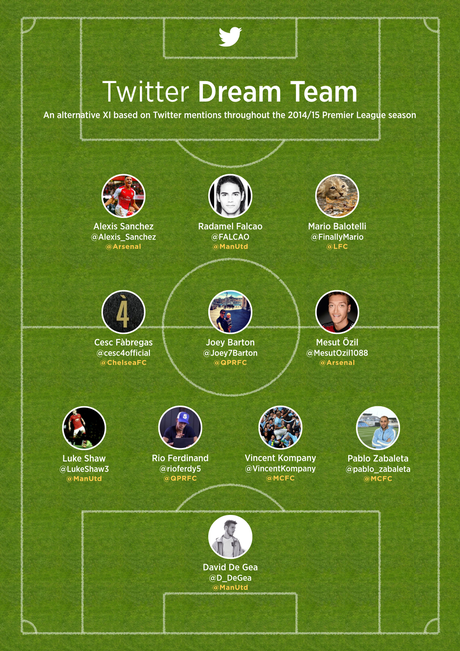