Grimandi has been spotted in Paris observing Rabiot.

Paris Saint-Germain starlet Adrien Rabiot has been attracting plenty of admirers, with both Arsenal and Chelsea said to be in the hunt for the teenager, reports Le Parisian.

The French wonderkid, 18, has previously been linked with a switch to Tottenham Hotspur, with Le10 Sport claiming in October the north London club were planning a move for the central midfielder (see image). 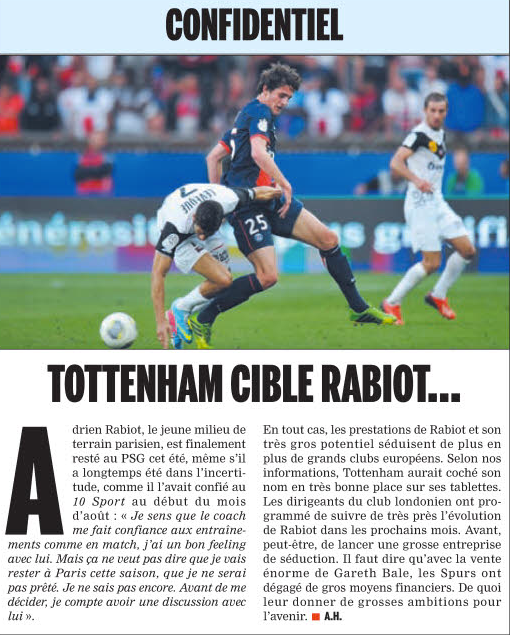 But now it seems Spurs have been overshadowed by their rivals Arsenal, whose scout Gilles Grimandi was spotted at the PSG versus Lyon match observing the youngster.

Meanwhile, Blues manager Jose Mourinho reportedly rates Rabiot as one of the top targets for the west London club, as they continue their tactic of acquiring talent young before developing them.

Chelsea are currently nurturing the likes of Thibaut Courtois and Romelu Lukaku in this vain and would hope to do the same with the Frenchman by sending him out on loan.

The midfielder certainly fits that bill and is gaining valuable experience at the Parc des Princes despite being among a plethora of expensive talent.

So far this season Rabiot has made 19 appearances in all competitions, which has included playing in five of PSG’s six Champions League group matches.

The France under-19 international is a product of the youth team at the Parisian side and the Ligue 1 champions are keen to keep hold of their starlet, with the promise of a new contract hoping to achieve that.

Rabiot’s current deal expires in 2015 and with PSG constantly buying new, expensive talent to compete with, the midfield ace may well be tempted by a move to England.

Despite being so young and having a fairly slender build the youngster is not afraid of the physical side of the game and excels in tackling and breaking up play, as well as being strong in aerial duels.

Juventus have also been linked with a move for the teenager by Italian broadcaster SportMediaSet.