Schalke star unlikely to be heading for the Allianz Arena.

Arsenal target Julian Draxler has distanced himself from reports linking him with a summer move to Bayern Munich.

German daily Bild says the Bavarians giants could use the money from the sale of Toni Kroos (who has been linked to Manchester United) to fund a move for Schalke’s Draxler, who fits the profile preferred by Bayern’s board of a young Germany international.

But, when asked about interest from Pep Guardiola’s side, Draxler told Bild: “Let’s say it’s a rumour.” 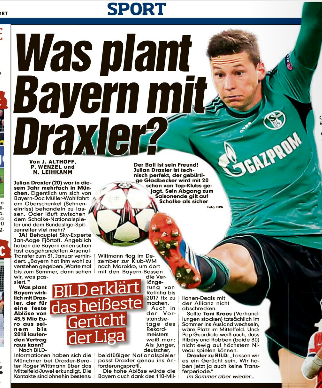 Arsenal, meanwhile, appear to have a more concrete interest in the 20-year-old, who has not played since mid-December since suffering an ankle injury.

Schalke general manager Horst Heldt told Sport1 that an official enquiry had been made by the North London outfit during the January transfer window.

Draxler, meanwhile, has previously hinted he would be interested in a move to the Emirates Stadium.

“Schalke have no intention to sell me and my exit clause only takes effect in the summer,” Draxler is quoted as saying by Goal.com in December.

“I have always said English teams are very big clubs and Arsenal is of course one of them,” continued the skilful attacking midfielder.

“Of course I sometimes speak to [Arsenal players] Mesut [Ozil] or Per [Mertesacker] about the team, about the club, and they always have good words and they tell me nice things.

“You never know what happens in the summer but Arsenal is a very, very nice team. They always have very young players, they play attractive football and that’s what I like.”

The young playmaker has spent most of this season on the left wing for Schalke but would prefer to play a number ten role for the Bundesliga outfit.

“I’ve now come to terms with the fact that I won’t always play in the no.10 position,” Draxler is quoted as saying by Bleacher Report.

“We do play a flexible system, however, which means I can keep popping up in the centre.

“It’s understandable when you sign a player of Kevin’s class that you use him in his strongest position.

“And I can also understand Max [Meyer] playing centrally. His abilities are put to better use there than out wide.”

Draxler has made 20 appearances for Schalke this season, scoring four times and bagging five assists.

Image via the excellent Sport Witness.