Arsene Wenger is back to his old tricks again.

The Metro are reporting that the Arsenal manager has completed the signing of 16-year-old midfielder Vlad Dragomir from Romanian outfit ACS Poli Timisoara.

Romania’s Under-16 captain joins the Gunners on a three-year contract for £100,000, after Wenger and his Gunners staff conducted an 18-month scouting job, claim the Metro.

Dragomir’s agent is quoted by The Metro as saying: “I proposed to Arsenal a year ago and a half, during which they monitored closely. In my opinion, Vlad is one of the most talented players in Europe at the moment.” 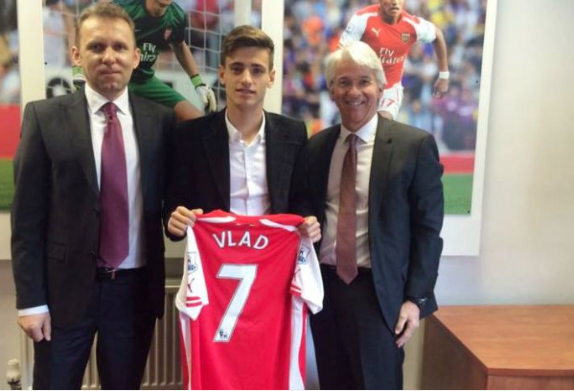 The Metro say that Italian giants Inter Milan were also interested in the highly-rated teenager.

It may have been Wenger’s reputation for nurturing youngsters which persuade Dragomir to pick the Emirates Stadium.

The Frenchman has plucked the likes of Nicolas Anelka, Cesc Fabregas, Gael Clichy, Alex Song and, most recently, Hector Bellerin, from the youth ranks of European clubs and turned them into Premier League stars.

And he will hope that his thorough scouring of the overseas market will pay dividends again with Dragomir, who comes cheaper than similarly-qualified English counterparts such as Raheem Sterling and Isaiah Brown.

The Daily Mail claim that Sterling’s 2010 move from Queens Park Rangers to Liverpool as a 15-year-old cost the Reds an initial £500,000, while Chelsea were forced to pay West Bromwich Albion around £1m in compensation for 16-year-old Brown in 2013, according to the Express & Star.

So, although Wenger has splashed out £42m on Mesut Ozil and £30m on Alexis Sanchez over the past two summers – figures according to Sky Sports – he has clearly not completely abandoned the transfer policy that he relied upon for many years.

Whether Arsenal fans will support that policy when they seem to only be a couple of top-class players away from being genuine Premier League title contenders will likely depend on their other summer business.