Borussia Dortmund’s Reus will not be leaving for £30m until the end of next season.

There is some disappointing news coming out of Borussia Dortmund for Arsenal and Manchester United, as transfer target Marco Reus’ £30m release clause is not active until 2015.

Because many of you asking: Marco Reus’ buy-out-clause ACTIVE summer 2015. If someone writes otherwise: It’s wrong!!!

The story that Fjortoft is reporting comes after much excitement surrounding Reus – as a buyout clause for the Germany international was confirmed last year.

“Marco Reus possesses a release clause option in his current contract at our club,” Dortmund executive Hans-Joachim Watzke was quoted by Sky Sports in November 2013.

“He could leave our club due to that.

“He is, however, the only player in our first-team squad that has such a contract clause.” 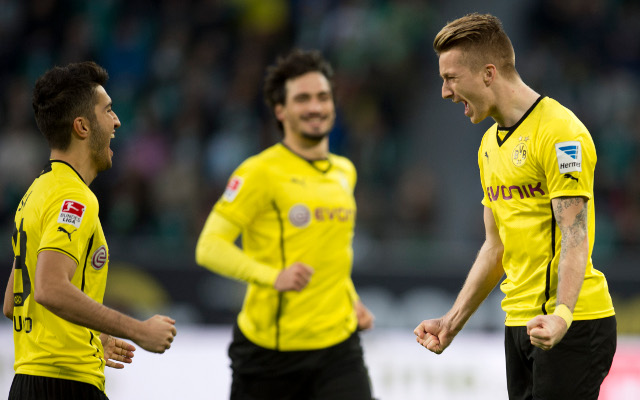 Since then there has been much hype around who will make a move for the 24-year-old, with the Gunners being linked with a switch by the Daily Express.

Due to the club’s so-called ‘German revolution’ – because of the influence of first team stars Per Mertesacker, Mesut Ozil and Lukas Podolski – there aren’t many high profile players from the country not linked with the Emirates Stadium.

However, with a plethora of attacking midfield talent already available to manager Arsene Wenger, it was always more likely the Red Devils would make an offer.

The Independent have named Reus as the player David Moyes wants to come in and help solve the Premier League champions’ problems.

United have struggled this term under the guidance of the Scot and many have said it’s their lack of creativity in midfield that is largely to blame.

Reus would be the ideal man to solve that issue, operating generally as a left winger but with the ability to play across the entire front line and a tendency to cut inside.

Since joining Dortmund from Borussia Monchengladbach in the summer of 2012 the attacking midfielder has played 75 matches in all competitions, scoring 31 goals and providing 26 assists.