Riewoldt says he won’t leave the Saints despite the team’s poor showing in 2014.

St. Kilda captain Nick Riewoldt has admitted that he is frustrated by the hapless Saints’ performances this season, but says that he has no plans to leave the club in search of a premiership.

Riewoldt was responding to suggestions made by former Essendon player and premiership winner Matthew Lloyd, who said that the 31-year-old should leave the Saints and join a club with a realistic shot at winning a Grand Final.

“In my situation I would say to what end would I be leaving the Saints for?” Riewoldt told Sportsday Radio.

“Obviously we all play footy for premierships and I have played in a team that was really, really close and we’re clearly a way off at the moment.

“But the only reason you would leave is if you had that guarantee and it’s just too hard to find in footy.

“What I would lose out on and the heartache it would cause me to leave St Kilda – a club that I love and have given my everything for – it’s really not on my radar.”

Riewoldt, who is contracted the Saints until the end of the 2015 season, says that he is frustrated with the Saints’ performances which see them sit bottom of the ladder after winning just three of their 14 games.

But he also says that expectations of his own performances won’t change despite the Saints’ young list.

“I’m not going to drop my standards because of where we’re at as a team and having young players,” he said.

“I’m still going to hold everyone and myself to the same high standards I always have.”

Riewoldt has kicked 33 goals this season and has been a shining light in what has been a disappointing year for St. Kilda. 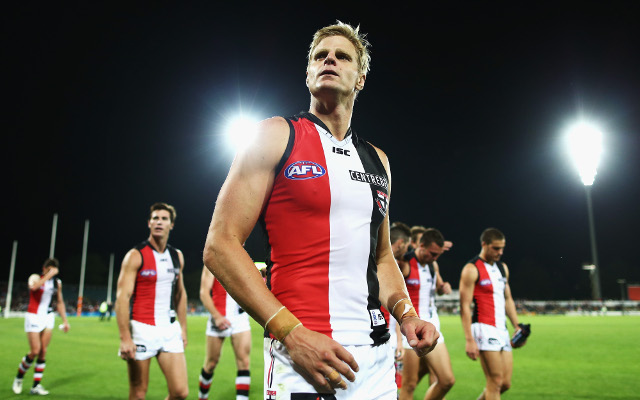