ABC have been forced to apologise after a tweet speculating on the condition of Hughes was slammed by Twitter users.

ABC News has apologised after sending a tweet speculating about whether Phil Hughes was alive after being struck by a Sean Abbott bouncer.

Hughes remains in critical condition and in an induced coma after undergoing surgery to relieve pressure on the brain.

ABC News tweeted that “Cricket NSW could not confirm if Phil Hughes was alive when he left”, and were flooded with messages criticising their lack of sensitivity. 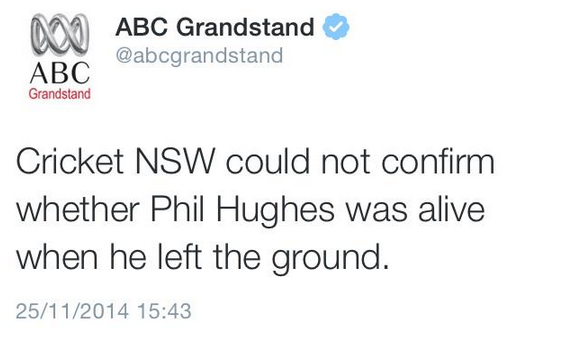 ABC sent out an apology two hours after the initial tweet, which has since been deleted.

Our earlier tweet about Phil Hughes’ condition as he left the SCG was insensitive and we apologise for any distress it may have caused.